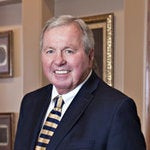 Mr. Beale has participated in well over 100 jury trials. He has been listed in the national publication, Best Lawyers in America , in every biannual edition since 1989. He is a Fellow in the American College of Trial Lawyers, the most prestigious society of trial lawyers in the country, with membership limited to the top 1% of lawyers in the U.S. He has served as a judge pro tem for the Maricopa County Superior Court.  In 2009, Mike was given the Professional Achievement Award by the James E. Rogers College of Law at the University of Arizona. In 2013 he was named Lawyer of the Year for Phoenix in the area of personal injury defense by Best Lawyers.

Thank you for contacting us. We will get back to you shortly.

Please complete all required fields below.