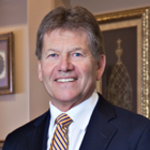 John has taken over 75 trials to a jury in the state and federal courts in Arizona. He has a Martindale-Hubbell “AV” attorney rating and is a State Bar Certified Specialist in Injury, and Wrongful Death Litigation. He has been listed in Best Lawyers in America and has been for over 15 years, as well as a Fellow in two of the most prestigious societies of trial lawyers in the country, the International Academy of Trial Lawyers (with membership limited to the top 500 trial lawyers in the U.S.) and the American College of Trial Lawyers (with membership limited to only 1% of trial lawyers in the U.S.). He has been named by Phoenix Magazine as one of the top lawyers in the Valley specializing in personal injury, medical malpractice, and civil litigation. He has been chosen as Lawyer of the Year for the Phoenix area by Best Lawyers in the Areas of Medical Malpractice and Personal Injury Law for 2011, 2012, 2013, 2014, 2015, 2016, 2017, and 2021. John was named the 2017 and 2021 Arizona Plaintiffs Medical Malpractice Lawyer of the Year by Best Lawyers. He was named Lawyer of the Year for 2017-2018 by the Phoenix Chapter of the American Board of Trial Advocates. John was named 2019 Lawyer of the Year by the Arizona Association for Justice.

Thank you for contacting us. We will get back to you shortly.

Please complete all required fields below.